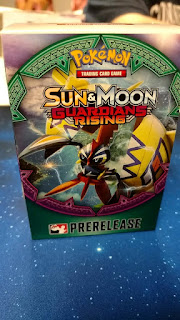 Last weekend I attend a Pre-Release for the new card game set of Pokemon, Sun and Moon: Guardians Rising. A Pokemon Pre-Release gets you a bunch of cards, and the opportunity to participate in a small draft with the new cards you just got. With the cards I got, I found a basis to build a new deck. My Pre-Release competition deck (only 40 cards) was based on Vanillite, an adorable ice cream cone. It worked really well and I won all 3 matches I was in. It got me thinking, I could make an entire 60 card deck based on Vanillite. So far, I have built the deck with almost all Guardians Rising cards and I have been testing it out some this week. So far it is doing pretty well, besides some bad starting hands that left me with no energy cards. Hopefully I will be able to tweak it some to make a fun and usable deck. In case you were wondering what all is in my deck, I have included my deck list below. If you like it, let me know! 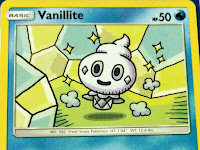 Popular posts from this blog

November 16, 2017
The Circuit Playground is a round circuit board developed by Adafruit Industries. It is designed specifically for education as an affordable circuit board stuffed to the brim with sensors and programmable bits. It includes things like Neopixel LEDs, a triple axis accelerometer, and IR send and receive sensor. There are two different versions of the board, the classic and the express. They are different and there are lots of reasons to have one over the other. Of course, that all sounds super complicated and technical, but I will break it down for you. The Circuit Playground Classic (or CP), is the original board. It costs less than the newer version but it has limitations. The CP can only be used with Arduino to program it. Arduino is programming language based on C. It's pretty common among open source hardware, so if you start of with CP, you can "upgrade" or move on to different boards that only run Arduino. The Circuit Playground Express (or CPX) can also be program
Read more 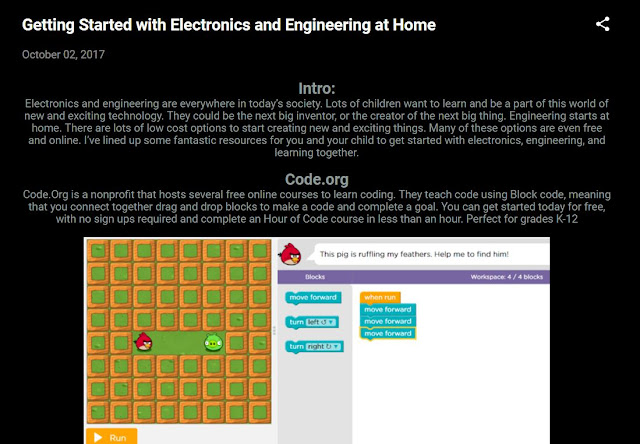 Hi everyone! Today a new guide is up on Maker411 ! This guide is something I wrote this summer to talk about starting off with electronics. It lists a bunch of my favorite circuit boards that I use all the time, plus it includes the 3D printer that I use! Take some time and check it out! It's definitely worth the read. Never Stop Making Rebecca the Maker
Read more

#iAspire, My Experience with the Aspirations in Computing Award

October 10, 2017
In my senior year of high school (2015-2016), I won the National Center for Women and Information Technology Aspirations in Computing Award for Connecticut. This award is given to young women in high school who show an active interest and/or involvement with computing. I wasn't really interest in computer science at the time, at least not the way it was taught as school, but I did a lot of STEM outreach through Girl Scouts. I wrote about that outreach, which was also my Gold Award project that was in progress at the time. I knew I wanted to go into electrical engineering, because of multiple summer camps in previous years where I fell in love with hardware, but because of my computer science class, I had my doubts. By earning this award I knew that people believed in me and my passion for education and STEM. I was also introduced to a vast community of people from different backgrounds with a thing in common, code and STEM. Being in the community offered a space for information a
Read more

Rebecca the Maker
My name is Rebecca. I am an Electrical Engineering student. My hobby is to make things with electronics, 3D printing, arts and crafts, and more! Stay tuned to see things that I do. Check out my other blogs.